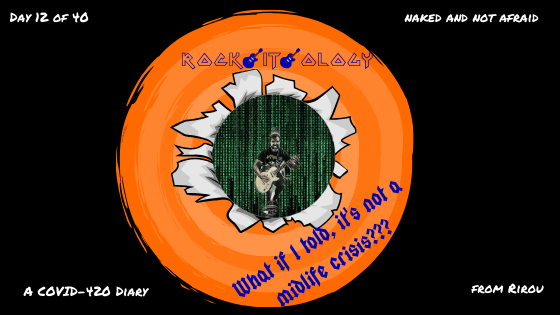 Rirou woke up that Tuesday March 24th, and he started the day with Yoga and coffee. This is favorite way to wake up, however is not always possible cause Rirou goes to sleep late. Rirou is just like a night owl and he feels empowered under the moon, but it was not always like. A few years back Rirou was a professional triathlete that woke up daily at 5 am, and now, well now it’s a completely different story. Yes, Rirou turns 40 this year but this is not a midlife crisis.

Yesterday was a big break through for Rirou, not only because he did not have a case of the Mondays after all this years, but because something clicked. Rirou was finally at the core of the issue.

Rirou have been wanting to talk about mental health for awhile, since he has been a health coach and an athlete for a long time and he have seen how little we talk about mental/spiritual health. We are all obsess with perfect body and how we look outside, but we almost don’t talk about how we look inside. Yeah, our feelings. Rirou was a good example, and he was punk enough to believe he could talk about it, actually write about it.

The interesting part is that writing for Rirou has always been his weakness. Just to have an idea Rirou always end up in summer class when it came to writing. English was a bit easier, but still. However, writing was the only way Rirou could speak from the heart and that was another life irony. Rirou did the same thing when he decided to became a professional triathlete. He was 24 years old 260 pounds and smoking 2 packs of cigarettes a day.

The important thing is that now it was different, Rirou was making real changes at the core of the issue, and that was not a midlife crisis. That was real healing, or like Rirou like to call a rebirth, and this quarantine was helping Riou work deeper inside out. After all being a punk is about attitude, and that was one thing Rirou was good at it, facing his demons.