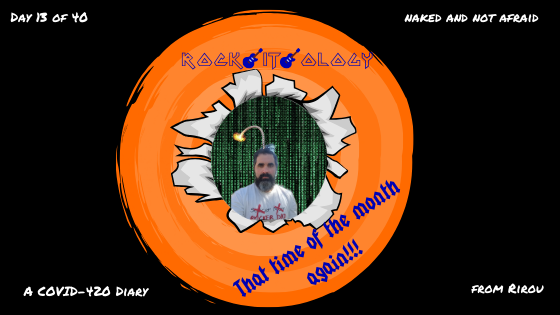 Rirou woke up that Wednesday March 25th a little off. He woke a little bit behind and started to rush to catch up getting Luke ready for the day. But also, Rirou was still tired, not physically but mentally. Depression sometimes feels like is 2 steps forward one step back, and working on it makes you tired.

Sometimes it takes one small thing to trigger the bomb in Rirou’s head. The biggest issue is when self doubt hits and that feels like everything just freeze and thinking clear becomes nearly impossible. When that happens and you add fatigue to it’s like a bomb just exploded. Hopefully is a different bomb, with a different lesson so you can keep moving forward. Sometimes, is the same bomb and that is a different feeling, because is a feeling that you are stuck.

Rirou like to call those bombs as releasing the demons inside of his head, and the only way to move forward is facing them, otherwise they get too big they will take you down, and that is a place you never want to go back. It’s like racing an ironman; you have to face the pain in order to finish the race otherwise you end up quitting, and that is not a good feeling at all, and that is a place you don’t want to go back either. Quitting never feels good. So, this time was the same bomb again. Yes it sucks, but this bomb that has been exploding for awhile in Rirou’s head. It’s an enormous bomb the biggest he have ever seen. This is the bomb that holds the matrix together, but on the bright side, that bomb is getting much smaller and a lot less intense.

On top of that, it was that time of the month again. Rirou was 1 week from another therapy session, so he was with PTW (Pre therapy week, male version of PMS). Although, this time the feeling was different, very different…

Happy to say that I reversed my hypothyroidism naturally, and no more pills. I am off synthroid. Wrote a blog post about it. Link in the bio!
The feeling after learning my first @badreligionband song in the drums. Learned American Jesus, which was the first song I learned in the guitar when I went back to school, the school of rock @schoolofrockbroomfield.
Finally hit it 100 subscribes on my YouTube channel. That is cool.