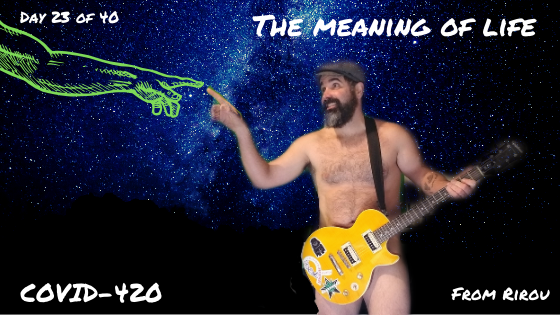 Day 23rd of Rirou’s COVID-19 isolation and his is things were getting clear by the day in his matrix, while the collective matrix was still a mess. Rirou was finally understanding his higher purpose, and that it’s what was missing in Rirou’s life. After Luke was born Rirou had a clear picture in his mind of the meaning of life, he now just needed a higher purpose.

Back in 2003 Rirou made an option for his life, the option of laying down in bed at night with a clear conscious. That is the main reason why Rirou did not take any drugs during his athlete career, and the reason why Rirou quit business school; he saw too much corruption on the low level and the highest level, that he did not want to be part of it. Rirou has always being a punk and he did not tolerate bullshit, and the older he gets the ability to tolerate get lower exponentially.

Back in 2013 Rirou’s crisis was more about the body, since he made the option in 2003 that he would sleep with a clear conscious he was feeling much better. In 2013 he had achieved his dream body with 160 pounds and 6% body fat, but he still didn’t feel like he looked good naked. So, Rirou went into a new revolution that went all the way up to 2018 when he ran to the hills. Rirou accepted his body.

Back 2016 Rirou did not have a crisis, he had an spiritual awakening that Luke brought to him. Luke brought Rirou something that no life coach, no religion, no parent, could have giving him, only a child can give, after all children are the biggest teachers in life.

Rirou is a moonchild and he believes in being the change he wishes to see in the world, and since the meaning of life is to look good naked; which is totally related to how you feel about yourself. Rirou, as a master punk, decided to get something that made him feel bad for years (Religion) and make one that is the complete opposite, a religion based on JOY! The collective matrix was going to an existential crisis with the COVID-19, so now was the perfect time to start writing about it.

Rirou was no longer a procrastinator, and now he was finally fulfilling his prophecy. He finally looking good naked.