A few years ago Rirou was tired of racing ironman and he felt the need to change and do something more meaningful. Rirou always heard that he had an ability to reinvent himself, even though is not really about reinventing himself, is more like a rebirth.

Rirou created this blog to share his journey with the hopes that might one day motivate someone. The whole idea of the blog is to talk about all aspects of life, specially mental health, music and fatherhood.

This week completes one year that Rirou joined school of rock to start learning a life time dream: Learn how to play the guitar and sing. Not only that, Rirou had an idea of creating punk rock songs for kids.

Yes, is true Rirou transform himself. Well, he likes claim “it’s a rebirth”. On Saturday 6/13/20 the very first Rock-it-ology Punk rock song for kids got ready and Luke approved.

Rirou decided to launched his very first song next Sunday 06/21/20, his 40th birthday and father’s day. Stay tuned for the Rock-it-ology very first single this Sunday.

Speaking of father’s day, have you got your Rocker Dad shirt yet?

Also, check out the schedule of the blog in case you like the story.

Why chewbacca Monday? Well, it’s kind of motivation Monday, but since I stopped shaving my body I realized I have so much hair that I am like Chewbacca. Sorry is too much information, but its the reality. 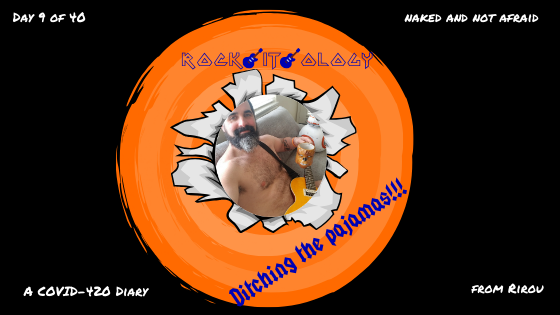 Saturday march 21th, Rirou woke up that day like just like another Saturday, he woke up slow. Well, now without school he was waking slow everyday. After all is has been 9 days of officially quarantine, but Rirou and his family were in quarantine for 16 days already. It has been 16 days in pajamas pretty much.

During the COVID-19 quarantine it became a normal thing to people go live on social media, talking about many different topics. Some lives, were awesome, other not so much. Rirou was not really into this but sometimes it was fun. After all, Rirou was getting some social media distancing and it was helping him.

Rirou went to watch a live, normally he did not participate, he just watched and for some reason he decided to ask a question. It was live about spirituality, energy and mind; something that Rirou loves. So, Rirou asked the question and due to his username the response was the same old story, a simple: “You got to be careful with Rock”, meaning the Rock (punk. metal etc) was a bad vibe. But for the first time in 40 years he did not get mad, in fact he laugh and thought the bullshit is everywhere.

Rirou finished the live, and he could not understand why people say that Rock is bad vibe? If spirituality is about inner peace and Rock gave Rirou inner peace, how could be bad? After all if it wasn’t for Rock Rirou would not even be there watching that live. Rirou have had suicidal thoughts in the past and Rock was the only thing that have helped him. Rock made him and his family happy.

That day Rirou reacted differently, like a rebirth from the matrix the red pill was working. Rirou was not angry anymore, and he took that as a sign. A sign that it was time to share the story and continue his plot, after all Rirou belived in being the change you wish to in the world. Rirou made huge progress in looking good naked, but that live made him no longer afraid… it was time to ditch the pajamas.

Rirou woke up that Tuesday March 17th, took the dog out before Luke woke up. The birds were singing, the air was lighter. He finally heard his wife and took social distancing to a whole new level, he started a social media distancing.He finally listened to her, she has been saying for months. So, he started a week off social media.

Rirou knew that he needed to change, taking a break from social media would help. Just that morning, he was able to listen to the birds like it was 1990, thanks to the corona virus there is almost no noise at streets. Rirou not only heard the birds but he was these three little birds chancing each other, and they almost hit Bolt (Rirou’s dog). He then decided to walk barefoot on the grass for grounding, and that helped. But listening to the birds singing was what made Rirou more centered. But the real changed needed to be from inside.

Rirou likes to walk his dog at night look the stars, because is quite and the stars give leaves Rirou in awe. However, that was the first time in awhile that he felt like that during a day walk. Something about those birds felt like something was about to change.

Rirou stopped to think about it, what he needed to change. After all he already changed so much, it’s like his wife got a new husband. Meaning, Rirou has change so much that family and close friends thinks that he have an ability to reinvent himself over and over again. That reality, is not like that. All this time, Rirou was just trying to feel comfortable in his own skin. Now, Rirou finally looked good naked, he was finally comfortable in his skin, he finally loved himself. But why was he still procrastinating?

That day Rirou did some yoga, and after all the activities were done, and a long meditation session. After that, Rirou sat outside under the moon with pen and paper. When he realized it was 1 am and he had written more in one day than in the entire year. And that felt good…